Old Morro Bay Elementary Campus:
Will it Be Demolished? 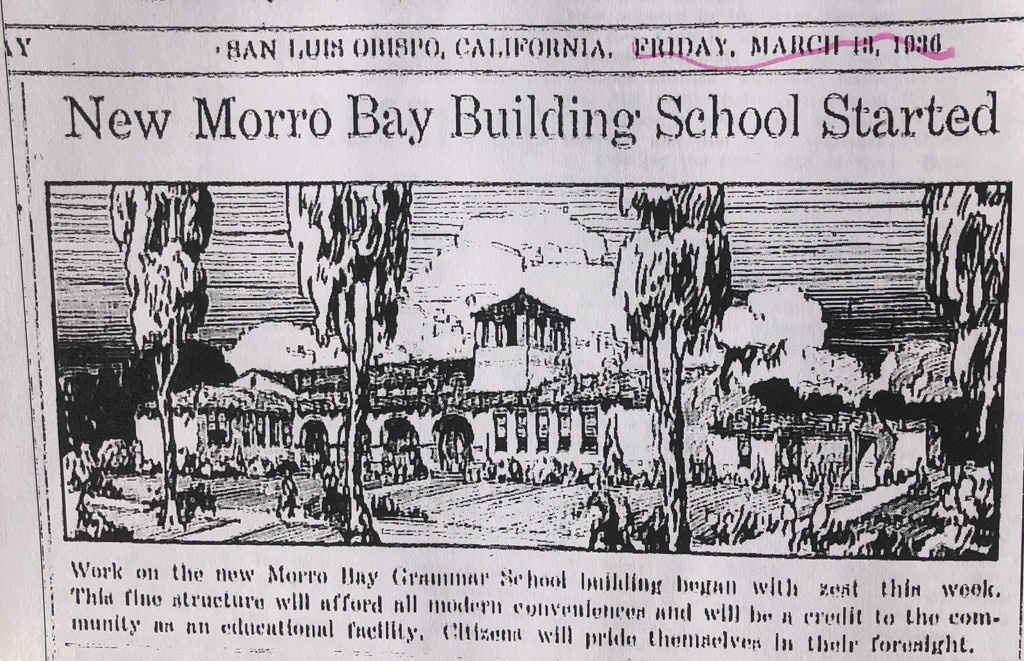 From a Source of Civic Pride..

When the Sun Bulletin first announced the coming of the new grammar school in 1935, it stated that the building would cost $61,000. $35,000 of that would be a bond issue at 4% interest (prevailing interest at the time was 6%, so it was a good deal). The final $26,000 would come from a Public Works Administration (PWA) grant.

As the Bulletin notes in the caption above, in making the commitment to build the school, "Citizens will pride themselves in their foresight."

Citizens might well have taken pride that these old buildings sparked the imaginations of generations of youngsters. Many current residents of Morro Bay have fond memories of the school either as students or teachers.

Is the value of the old school really all used up?

The Historical Society of Morro Bay thinks not. In a town with far too little remaining of its historic roots, the HSMB wants to preserve these buildings. They are historic by any measure, including intrinsic architectural value, connections to historic events, or because of the special people who used them.

We think they have a lot of life yet.

...To a Housing Development

During the pandemic year 2020, the San Luis Coastal Unified School District (SLCUSD) chose to monetize the Morro Bay Elementary School campus from among three possible locations. This parcel of almost 10 acres, including the largest piece of open space near the old downtown core, will be developed to provide housing.

The plan as of fall 2020 was to put up to 150 manufactured homes on slabs. A portion of these would be "affordable" and some could be tiny homes. These residences would be developed and managed by a for profit third party, but the school district would retain ownership and gain annual revenue through long term leases.

SLCUSD is facing a decline in revenue when the Diablo Canyon nuclear power plant shuts down finally in 2025 or 2026. The district's greatest need is not for capital to build new schools. Therefore, they are looking for ways to generate an ongoing stream of revenue from the school site.

The district and its consultants have identified several options for the development. The trade off between developing more housing vs. saving more of the old campus hangs in the balance. The amount of the old school campus that would be demolished varies among options, but it is almost certain that a large part of the campus would be gone in order to generate the money the district wants.