The Abalone Capital of the World*

By the middle of the twentieth century, Morro Bay was the biggest source of abalone destined for the dinner plate in the United States. 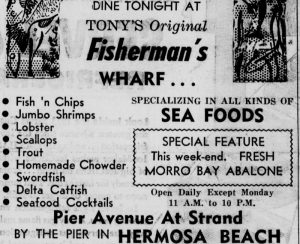 uThe city's name was splashed across restaurant menus up and down the West Coast.  The ad for Tony’s Original Fisherman’s Wharf was typical of restaurants in the early 1950’s, suggesting the importance of the abalone fishery for Morro Bay and implying that a big abalone fishing fleet was based here.

The abalone divers of Morro Bay landed millions of pounds of abalone from 1916 through the early 1960s, mostly red abalone (haliotis rufescens). They defined the character of the local fishing industry, with abalone landings on a par with the other fisheries and the sport fishing industry that grew in the late 1950s. These thriving businesses still echo in the names of the families whose members’ dangerous work helped the city to prosper.

Yet by 1975 the abalone fishery landings declined sharply, and the last commercial landing in Morro Bay was in 1980.  Abalone sport fishing continued at a much lower level until 1997, when the State of California closed the fishery to both commercial and sport south of San Francisco.  Over the whole coast, there have been several factors cited as causes of the decline: overfishing, withering foot disease and the impacts of a warming ocean (El Nino) on the kelp abalone need to survive.  But among these causes along the Morro Bay coast, evidence shows that the proximate cause of the reduced landings from the commercial fishermen is the increase in the number of Southern sea otter.  It is difficult if not impossible for a commercial abalone fishing industry to co-exist with a large number of sea otters.

The cute, furry Southern sea otter staged a comeback from near extinction in the aftermath of unrelenting hunting for fur in the eighteenth and nineteenth centuries. The otters were helped by the 1911 Fur Seal Treaty, and later under the protection of the Marine Mammal Protection Act of 1972 and the Endangered Species Act of 1976.  Sea otters were listed as “threatened” in 1977, and are still so listed at this time (2020). They slowly recovered in numbers, expanding their range down the coast past Big Sur in the 1960’s.  Since these animals depend on a lot of daily calories in their diet in order to survive the cold of the Pacific, they will gorge on whatever shellfish (up to 60 species) they can reach. They loved the abalone as much as humans do. 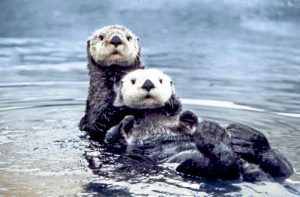 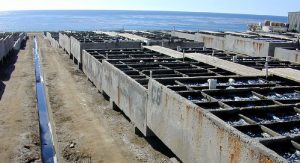 The commercial abalone industry which had once defined the character of Morro Bay came to an end in the mid-1970s when the once-abundant abalone had drastically declined in number. Efforts to revive abalone through mariculture, led by pioneers like Frank Brebes, have had some success locally, with The Abalone Farm that was started in 1968 near Cayucos being the largest “farm” on the Pacific coast. Mariculture has proved to be able to raise abalone, but not nearly enough to supplant the natural fishery that had existed.  (Prices for abalone today reflect that fact!)  The one thing that might bring abalone back to Morro Bay would be to eliminate the sea otters, but otters are too widely loved for that to happen. Commercial abalone fishing is not coming back to Morro Bay anytime soon.

For a half century abalone was one of the prime economic drivers of Morro Bay. During that short time, the city played an outsized role in at least one unique industry that has left an indelible mark.  The story has some heroes, technical prowess, successes and failures, and tragedy. It’s very well worth knowing.

A Brief History of the Central Coast Abalone Fishery

There is a lot of evidence in middens that Native American tribes ate abalone. They were able to find a sufficient number of animals in the intertidal zone along rocky shores to supplement their diet, and their impact on the prevalence of the analone would have been minimal. In the nineteenth century, Asian immigrants—first the Chinese in roughly 1850 – 1920, and then the Japanese 1897 – 1941—brought a taste for abalone with them.

The Chinese fished the intertidal zone, like the Native Americans before them, using rods or poles to knock the abalone from the rock. They dried the meat in a traditional fashion and sent it back to China, where the demand for it was strong. There was no competition for the abalone at that time because the European Americans had no taste for it!

In 1897, in response to information from a Japanese American farmer, a Japanese university sent Gennosuke Kodani to research the potential of the abalone near Monterey. He recognized that the fishery could support a big industry and found a relatively sheltered location where fishermen could base.  In about 1900, several Japanese companies formed to pursue the abalone.  In 1903, an outfit called the Suzuke Company out of San Francisco signed a contract with a processing plant in Cayucos to take any and all abalone it could find (story right). Cayucos became one of several places along the coast where abalone could be landed and processed. 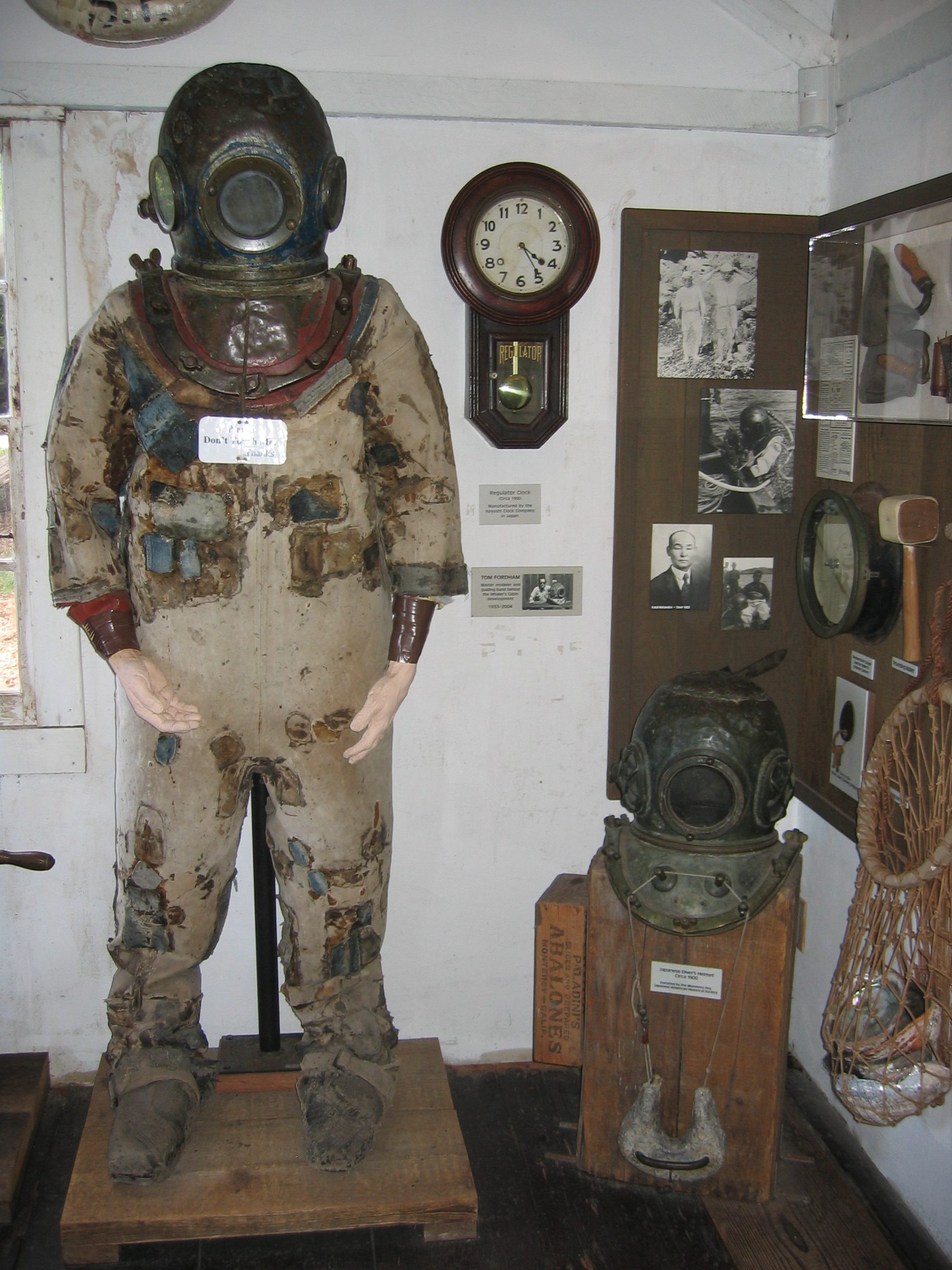 The Japanese were experienced in the use of heavy diving gear that facilitated surface-based compressed air for the diver. This technology allowed the fishermen to dive more deeply and take more abalone. The heavy gear, modified over the years, was the method used by abalone divers until the early 1960s when lighter SCUBA alternatives were created.

The commercial abalone fishery grew steadily during the early decades of the twentieth century. Morro Bay was a natural fit for the business because of the somewhat sheltered harbor and proximity of rich abalone beds in the kelp forest along the rocky shoreline. After about 1930, Native and European American families began to enter the industry, sharing it with the Japanese until the advent of World War II, when the Japanese were frozen out.

Some of Morro Bay’s most well-known families are descendants of the commercial divers.  One of the families, the Pierces, got their start in 1928 when Bill Pierce put on his heavy dive gear and walked into the ocean from the beach. Within a couple years, the Pierces had bought a boat and then opened a processing plant at 580 Monterey Street. This family was prominent in commercial abalone fishing until the very end of the fishery. 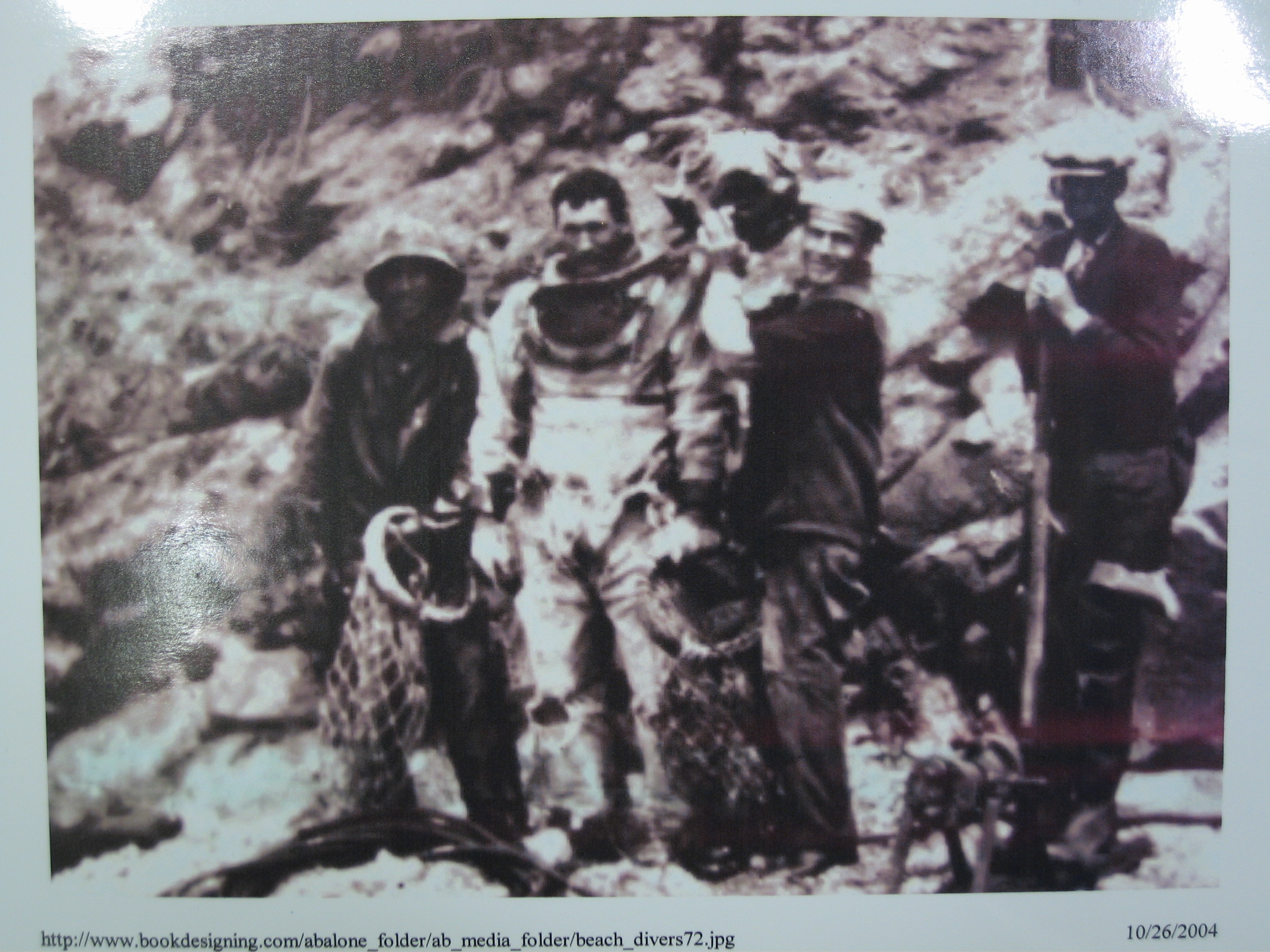 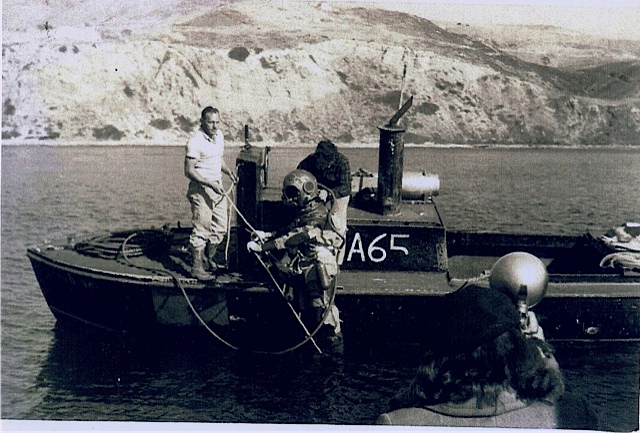 Most of the work out of Morro Bay was done by small scale operations that owned one or a few mostly small, open boats.  The boats were used as diving platforms with the air compressor on the surface feeding an air line down to the diver in his heavy suit that could weigh as much as 100 pounds at the surface.  Divers spent long hours in the intensely cold Pacific, protected only by their vulnerable suits and warmed by layer after layer of woolen clothes.

The boat crews from 1930 to the early 60s typically had three members, the diver, a tender, and the pilot/operator.  Each of these had to work carefully to coordinate with and support the diver as he moved along the seafloor. The pilot’s job was crucial because he had to follow the diver carefully, making sure that the air line did not wrap or get cut by the propeller.  More than one diver lost his life when his air line was cut.  This was not a job for the faint of heart. 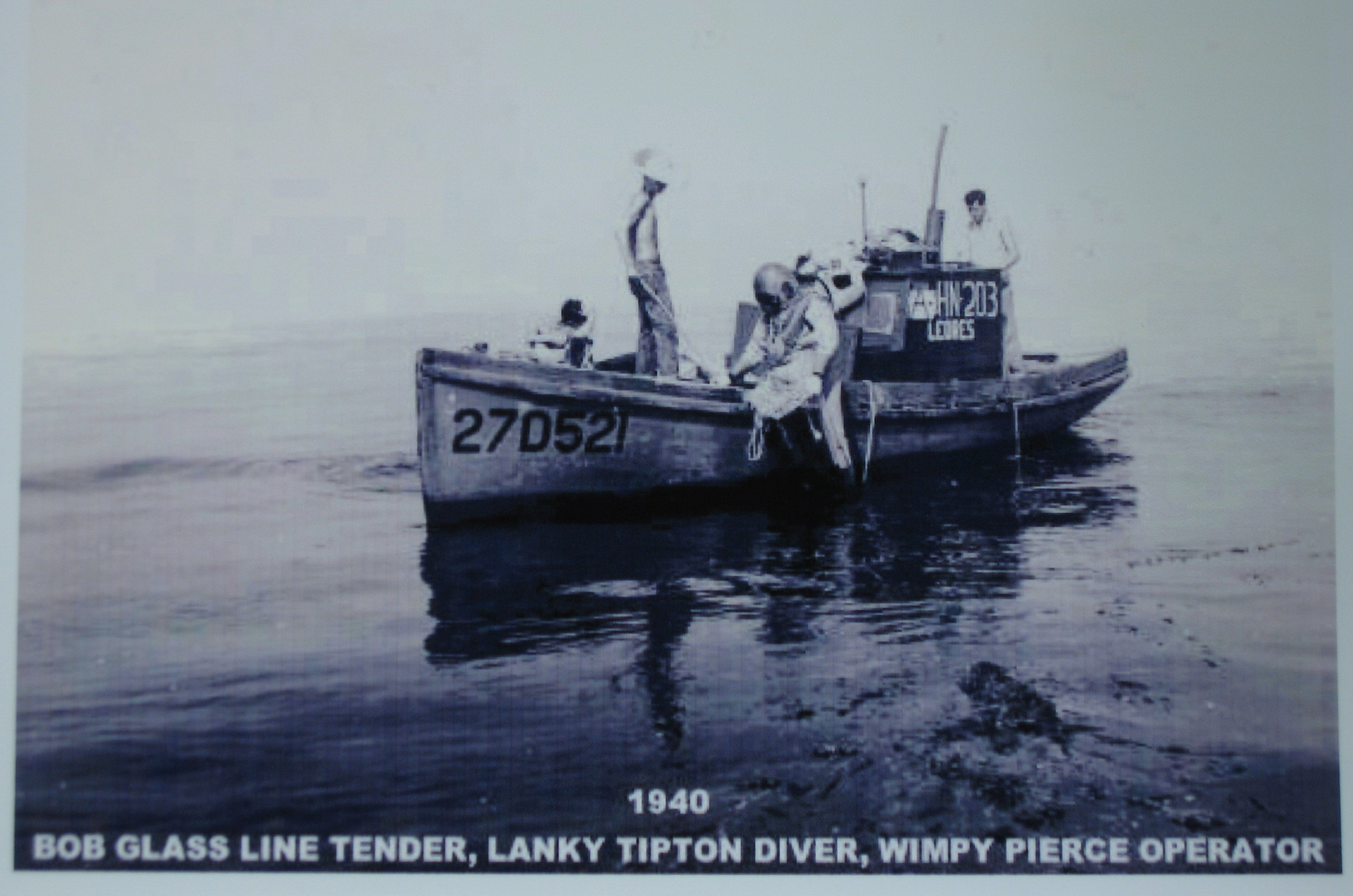 It took World War II to finally provide the impetus to build the harbor infrastructure that locals had long sought to develop a more robust fishing and shipping industry. After much deliberation, the Navy decided to improve the harbor for a support base. Then in 1943 the project was suspended because Port San Luis seemed to do the job. Finally, with the growing emphasis on the war in the Pacific and its strategy to stage amphibious invasions island to island, the Morro Bay harbor was used as an Amphibious Training Base from early 1944 through the end of the war.

*All rights reserved. No part of this publication may be reproduced or transmitted in any formor by any means whatsoever without express written permission from the Historical Society of Morro Bay. Contact HSMB at info@historicalmorrobay.org or via mail at P.O. Box 921, Morro Bay, CA 93443. 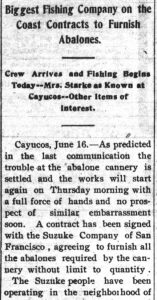